I appear to have been challenged by my friend Julie Dawn Fox in Portugal (an excellent expat travel writer), to join the CBBH Photo Challenge.

September’s theme is (and very nearly ‘was’) REPETITION.

From an utter inability to think of material for a photograph representing ‘repetition’ to a culmination of overwhelming choice I am reeling in the eventual realisation that repetition is all around!

… the digging, the planting, the watering, the picking, the chopping, the cement mixing, the painting, the tiling, the grouting…  It’s all cycles.

Then it came to me in a flash one quite unmemorable morning, actually not unlike the morning before, that this was my photo.

Be it as it is, to me it is the epitome of repetition.

Every morning the same vegetables are watered in the same order, from the bottom of the garden up, so that one starts off with it all straightened out and does not have to keep sprinting to the rescue of an attention-seeking and willfully twisted hose pipe in full flow first thing in the morning as it invariably causes one to begin the day feeling distinctly aggravated.

Once this task has been completed the hose pipe needs to be wound up so as it is neither in direct sunlight nor blocking the entrance to the end barn.  It really is mind-blowing. 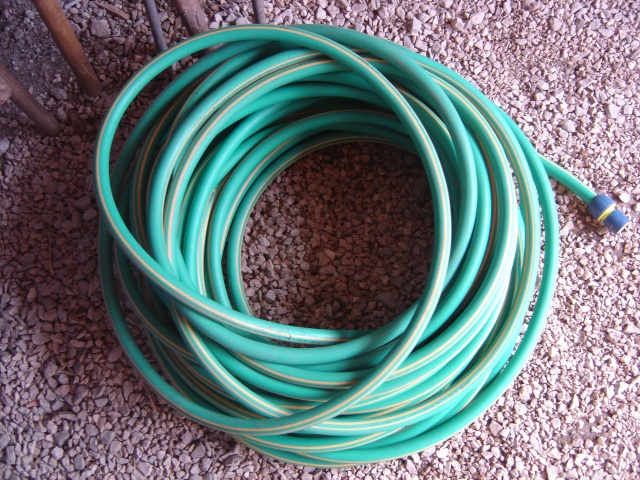 Here we have approximately 24 revolutions of the same cycle. Every morning. For six months of the year.
Gosh.
Or as my brother says, and I don’t know where he got this from but I like it:
‘Gopping’.

Do you know, one of these days I’m going to do something really outlandish like wind it up anti-clockwise or something.  I will.