A Load of Cobblers

In the summer of 2011 sanitation came to the village.  Luckily, having spent a thousand euros or more and as many hours of work building a septic tank only two years before, connection wasn’t compulsory.  (Not yet anyway, they said).

The winter of 2011 with the road not yet resurfaced saw the village become a quagmire and several casualties to the elderly, the sozzled and those not looking where they’re going.

Nobody knew how or when the resurfacing would happen.  And would they restore the street to its natural character or just tarmac the lot?

Finally, as spring passed, talk of the new works was beginning to yield insider information from one or two villagers with connections in the right places that the resurfacing was to start next week.  (This of course means next week or some time in the future, as one has grown to accept).

Word had it once or twice that the street was going to be restored properly.  But was it just a rumour?  Nobody was really convinced.

Finally, in the early-morning calm one day in June the cool village air was filled by the approaching rattle of trucks coming down the hill in convoy.  Finally!  They had arrived!

So what was it to be?

Tarmacadam or was it a load of cobblers? 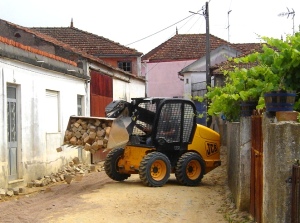 On hire from Toys R Us presumably, miniature JCB runs up and down the street all day long